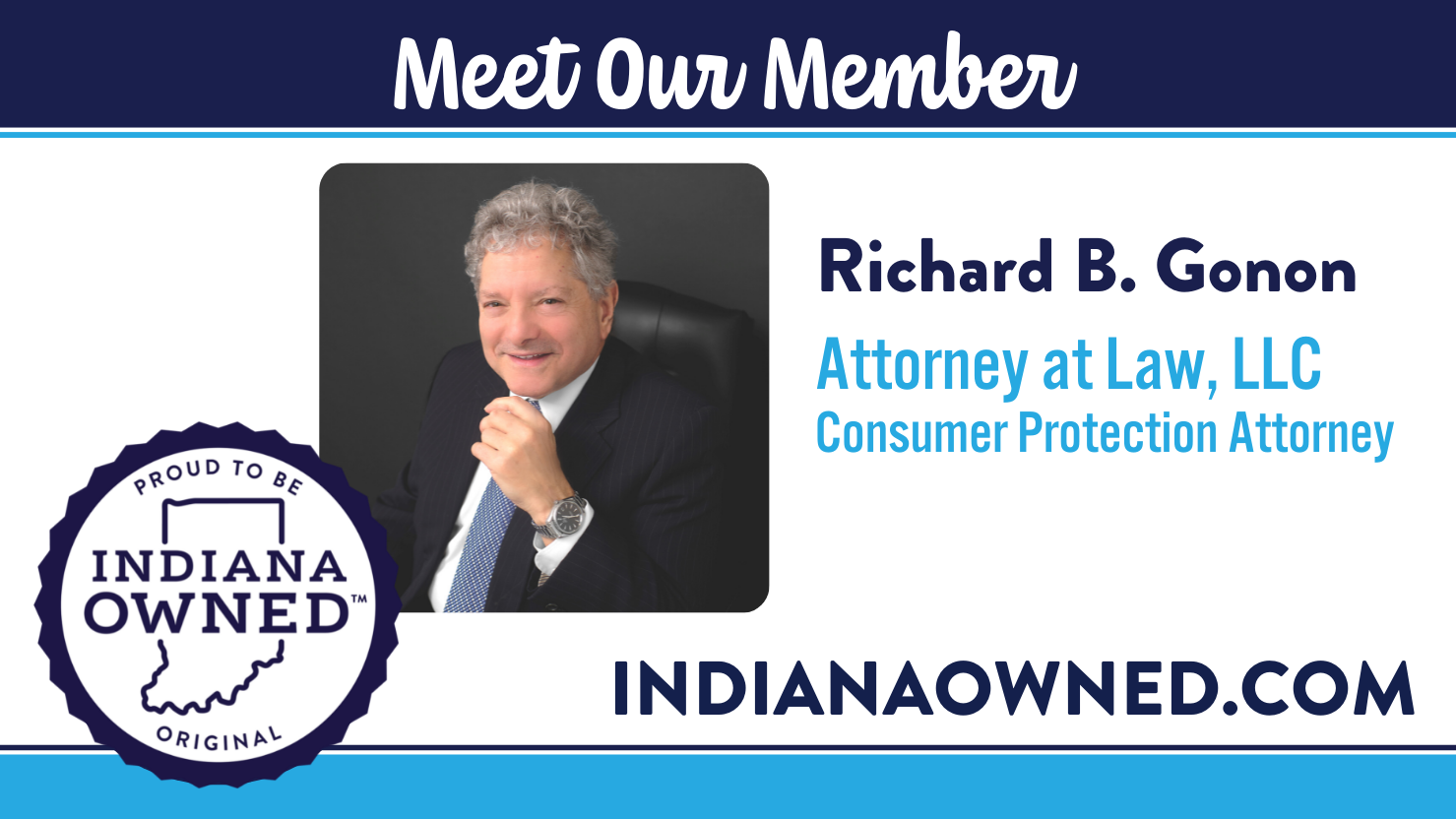 Richard B. Gonon has been in practice as an attorney in Indianapolis for 38 years, primarily in litigation. This includes the representation of consumers in matters such as real estate, contractual disputes, tort claims including bodily injury, and appeals. Richard has practiced statewide in a plethora of state courts as well as federal courts. Richard is confident about navigating a case through the judicial process, and is here to help consumers, small businesses, and anyone else who comes his way!

Get to know Richard as he reflects on his multifaceted approach as an attorney, what makes qualities make a good lawyer, and why he’s inclined to help Hoosiers from all walks of life.

Why were you inclined to pursue a career in the legal field?

I’m the only one in my family that went into this area of work, and it really started when I was in the seventh grade. One day I was staying home from school because I was sick. At that time (many moons ago) the local TV stations would run movies, and I just happened to be watching this movie released in 1959 called Anatomy of a Murderer.

Although I was only 13 years old, I was intrigued by this Hollywood, sensationalized courtroom scene between two Academy Award-winning actors that highlighted two lawyers. I remember watching James Stewart and George C. Scott, and they both went at each other in a very contentious argumentative manner. It just opened my eyes to a world that seemed interesting, and I took note of that. I would say Anatomy of a Murderer partially lead me to my path.

Did you choose entrepreneurism, or did it choose you?

I definitely believe that lawyers that work by themselves as sole practitioners must be entrepreneurial-oriented. I think the two are intertwined.

Because of the unique opportunities that were presented to me upon becoming an attorney, I wanted to give it a try. Being that I was only in my 20s, I had absolutely nothing to lose. The opportunities from the get-go enabled me to me forward as a sole practitioner.

What qualities make a good lawyer?

What is really important for an attorney that is in the litigation world, you have to be a really good listener. I mean, when your client is talking, you have to focus on everything that’s being said. Then you take it to the next step and determine certain aspects as to what’s positive and what’s negative, and strategize accordingly.

Based on what your client is telling you, being meticulous and analytical is extremely important.  You must have a good grasp of the law to see what is going to benefit your client and what might be an impediment based on your client’s situation. 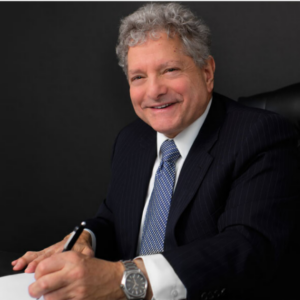 What do you want your clients to know about you?

In regard to consumer protection, I have had opportunities to represent people from all walks of life. Multimillionaires, middle-class, and working-class people. In my world of consumer protection, they all present similar problems. For example, they could encounter problems with being a homeowner; maybe the company that provided the service did not do it correctly. This could be a scenario that is apropos to someone who lives in a million-dollar house or somebody that lives in a $100,000 house. The same analogy applies to somebody that brought their car in for service and unfortunately, the dealership acted negligently and ruined the car. This situation has happened to both the affluent and the poor. It’s quite an interesting experience to interact with people from all walks of life.

There are certain things that happen that affect all of us, and that’s why the word consumer is very pervasive in nature. Irrespective of how wealthy you are, I have not met anybody in my life that feels okay getting ripped off or being taken advantage of. That transcends all socio-economic classes, all races, all ethnicities, all religions, etc. Consumer protection is very widespread in nature.

Why does supporting local and being known as Indiana Owned matter to you?

Supporting local businesses is really important, and I like to look at it as the “David versus Goliath” syndrome. I’ve been located in Indiana for more than a generation, and over the years I’ve interacted with small business owners as well as consumers, all from Indiana.  I realized that competing in this world against giant companies can be quite a significant challenge. Over the course of my career, I’ve developed relationships with homegrown folks that have shared similar problems, and I enjoy being an advocate for them.

Are there any common misconceptions about what you do?

There are misconceptions in terms of costs and expenses. Some consumers are reticent to move forward and work with an attorney because they feel that it’s too expensive or it’s not cost-effective. However, in a consumer context, there is a statute in Indiana that does help level the playing field. If a consumer is successful and can properly apply the provisions of this particular statute to their problem, then there is a legal basis for getting reimbursed out-of-pocket attorney fees.

Many don’t necessarily realize that attorney fees paid can be reproved and reimbursed. As a lawyer, I am really fortunate to have had positive results, coupled with the fact that very few lawyers are in the world of consumer protection.

What is the greatest challenge in your industry?

In the age of COVID, trying to get things accomplished with the judicial process. COVID has really changed my world. As an attorney in a litigation process in Marion County (where I do most of my work), I have not seen the lights of a courtroom since 2019.

The reason for this is when COVID hit in early 2020, the courts (particularly in the city county building in downtown Indy) immediately went to Zoom and WebEx to get the work done.

When I had mediation, the process completely changed. Mediation is a very positive development in the litigation world where cases go to a mediator in an attempt to get settled. All of these situations were being handled over WebEx and Zoom. The greatest challenge I found (as well as many other lawyers) was functioning effectively. When you are present in person, you can focus on the credibility of witnesses, plus you have more of a direct dialogue with the judge or the mediator.

Secondly, it is challenging to try to move cases along and deal with the system in a prolific manner where things get accomplished. Due to COVID, things get postponed more often. If you need to interact with witnesses who are major players in how the case is going to be developed and they are not available, it just delays the entire process. In a world without COVID, something that might take three to four months is now taking six to nine months.

What is the most rewarding aspect of your job?

I would say a favorable result where my client is happy and grateful, especially when my client would have felt lost without my interaction. A lot of consumers have been taken advantage of or engaged in transactions in which they haven’t received what they paid for. Many of them do not know what to do afterward.

For instance, if a consumer spent over $20,000 on home remodeling that was executed incorrectly, they desperately need help to move forward. It is very gratifying and rewarding to help that consumer with a positive result (and ensure they haven’t wasted their $20,000). Scenarios like that where I can help the consumer makes me feel really good.

What is one fun fact about yourself or your business that people may not know about?

I have a passion for tennis and have been playing for over 50 years. There’s one particular accolade that I’m really proud of…

In Indianapolis (summer of 1994), I played social doubles with one of the greatest tennis players in the history of tennis, Rod Laver. Rod won Wimbledon and had been ranked number one in the world, so obviously, I was very excited. After we finished playing and shook hands, he looked me in the eye and said, “Richard, you play well.”

I got a vicarious thrill and I felt like I just won Wimbledon. The fact that somebody who is at the summit in that sport complimented me, it just doesn’t get any better than that!

Can you leave us with one really great book recommendation?

The theme of To Kill a Mockingbird by Harper Lee is certainly relevant and important and relates to my line of work today.

Anything else we should know?

As succinct as I can put it, I’m here to help!

Want to be our next featured member? Sign up to become an Indiana Owned member today, and explore all the benefits of joining the community here!