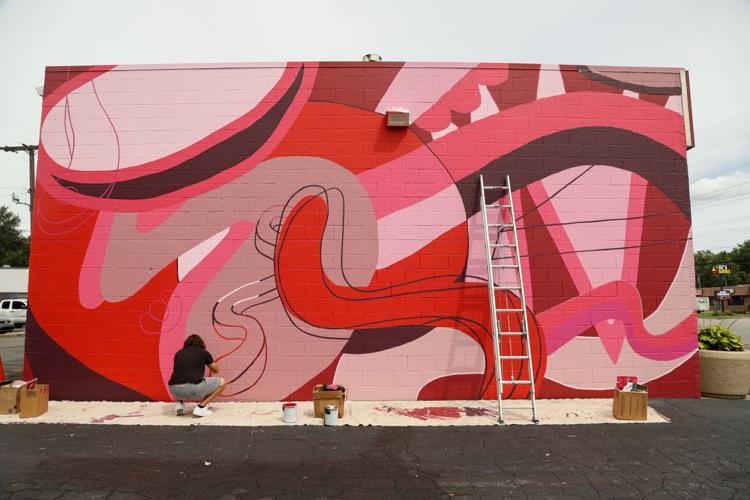 MERRILLVILLE — The Louvre. The Art Institute. The Met. The Guggenheim. The Getty. The Broad. The Whitney. Jiffy Lube?

Jiffy Lube of Indiana, an unlikely patron of the arts, is commissioning more artists around the state to paint murals on its stores, including on Broadway in Merrillville.

The oil change shop, a modern-day Medici, has partnered with the Arts Council of Indianapolis since 2016 to hire artists like Felix “Flex” Maldonado and Ish Muhammad to paint murals on store exteriors. The striking murals have gone up on Jiffy Lube locations in Chesterton, Griffith and Merrillville.

This year, Jiffy Lube is commissioning six more murals across the state, giving it 30 by year’s end.

“What began as a small idea in Indy in 2016 has now grown to 30 of our stores around the state,” Owner and President Steve Sanner said. “Hoosier artists are amazing and it has been really cool to see how they each bring their own unique perspective to the same canvas – the side of a Jiffy Lube service center. It’s become a wonderful way for us to connect with communities around our state and it’s been the perfect way for the Jiffy Lube brand to remain relevant on the 360+ days a year that our 600,000 Hoosier customers are not due for the oil changes, brakes and tire services that we provide better than anyone else.”

Johnathan Alejandro Arce was tapped to paint the mural “United and Divided” on the Jiffy Lube at 5920 Broadway in Merrillville, across the street from Andrean High School and just south of the Gary border. He’s a Gary native who graduated from Merrillville High School.

“A good friend Ish Muhammad told me about this project for this wall,” he said. “What I do is an abstract version of Aztec and Mayan hierography.” His work often features the motif of Mayan and Aztec graphic language and glyphs. His art “uses a range of mediums including acrylic, vinyl, oil, spray paint and silkscreen” and “hovers between figurative and abstract, formal and symbolic.”

He recently started work on the “United and Divided” mural on the Merrillville Jiffy Lube.

“It’s about migration and not just migration in Northwest Indiana, where a lot of people who lived in Gary moved to Merrillville and later Crown Point,” he said. “My family grew up in Texas super close to Mexico. My half-Mexican mom and dad met in Gary. It’s about the whole thing of Gary and united and divided places that are pretty divided by past segregation.”

General Manager Aaron Newell got to watch the artist in action.

“I am so excited that my store now has a mural of its own! Johnathon is such a talented artist and it was great to be able to watch him work and to see his masterpiece reveal itself,” he said. “I can’t stop looking at it and thinking about its meaning.”

Arce aspired to become an artist since childhood. He has been painting and drawing his whole life.

“The base on inspiration was my mother was constantly doodling these drawings,” he said. “I would see different artwork of Jesus and try my best to draw it. I would draw Renaissance pictures and pictures of Native Americans and World War II. It was a weird clump of different arts. I also baked cakes and did a bunch of different things. I was constantly creating as I grew up. I wanted to do something I liked. I wanted to do art and try my best and be happy rather than do something I don’t like.”

“I like the idea that the language is the art,” Arce said. “I think my main reason for getting into Aztec art is that I was always told it was the art of my people. I grew up half white and half Mexican and was told I wasn’t Mexican enough. I was also given little books by family about my past ancestry. Maybe there’s a better word for it, but it’s been an obsession.”

He’s painted many murals in Gary and Chicago and exhibited his work at Square One Culture Gallery in Gary’s Miller neighborhood. Arce also paints basketball courts for Project Blackboard and cut his teeth working as an apprentice for another artist.

“Long-term, I would like to keep creating art and bringing it to the area,” he said. “I would love to create a studio that would have studio space for other artists in the area. I love Northwest Indiana because it’s a little bit of everything. There’s Mexican food. There’s a Greek Fest. There’s Pierogi Fest. There’s everything. Everybody is in the area, and you can experience anything. The area is so blended.”

While there’s a lot of great art in Gary, downtown Valparaiso and other communities, the Region’s art scene isn’t as cohesive as it could be, Arce said.

“I feel like it’s missing something. It’s not as connected as I think it could be,” he said. “In Northwest Indiana, we don’t always have the support. A lot of artists think they have to go other places to do their best. I would like to see that change. A lot of people are trying their best to make things happen.”

Projects like the Jiffy Lube mural project can be beneficial.

“It’s an amazing opportunity,” he said. “I am grateful and thankful I was chosen for this project. It’s an important time for artists in the area and the entire state.”

Arce hopes to expose more people to the arts.

“My hope is viewers take away something pleasant from it,” he said. “It’s nice to see any art in Merrillville. It’s a piece on the Gary/Merrillville board. Gary is the place I come from and Merrillville is where I went to high school. The only art I saw growing up was in Gary, Chicago or trains passing by.”